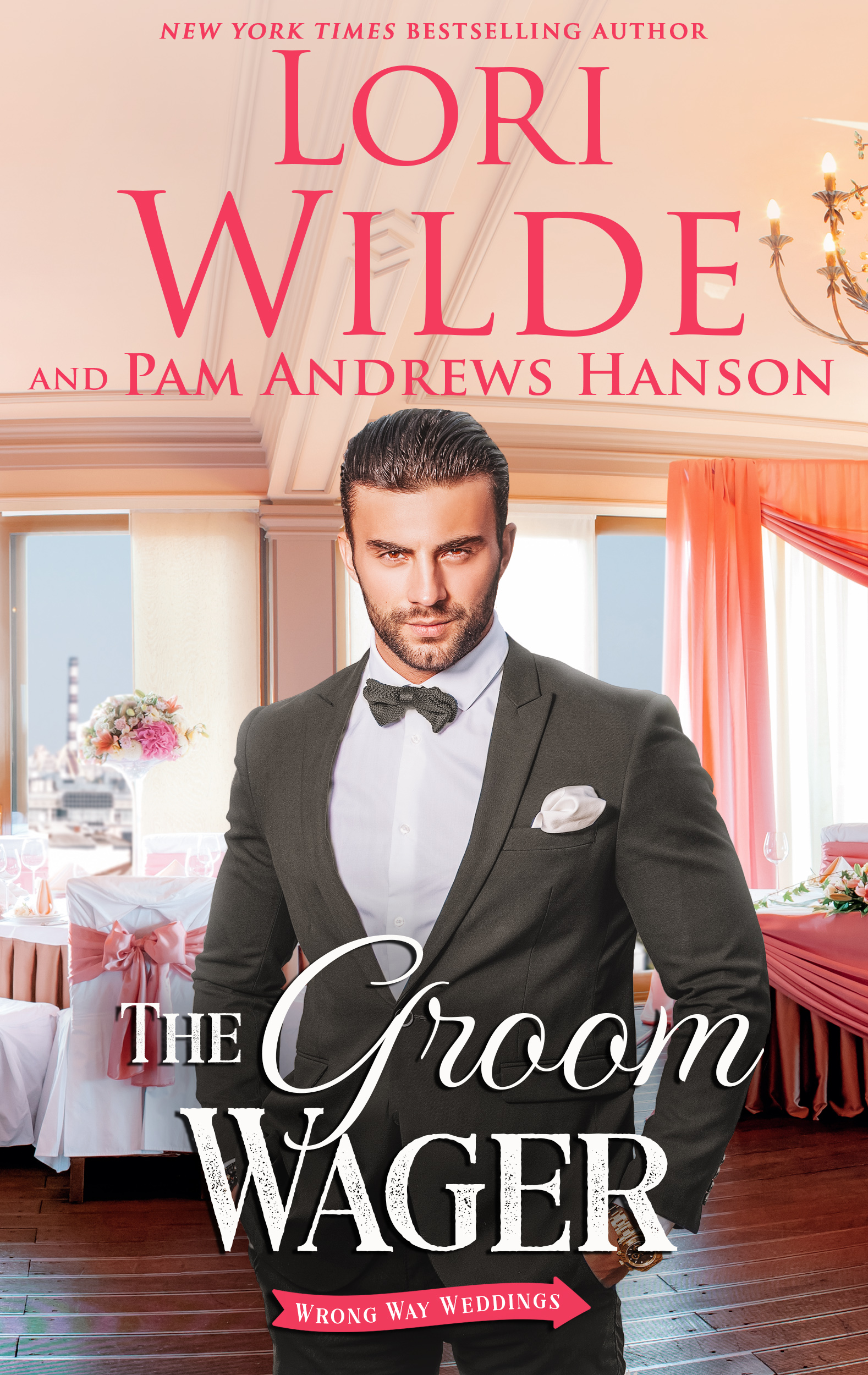 He’d eat some cake, kiss the bride and look for a virgin, but maybe not in that order.

Cole Bailey pulled into a spot as far away from the sprawling Tudor-style building as possible. As an uninvited guest, he didn’t want to make his pickup look conspicuous by using the Detroit country club’s valet service.

This wasn’t where he wanted to be. He’d been crazy to let a coin toss decide whether he or his twin brother, Zack, would be first to buckle under to their grandfather’s unreasonable demand of marriage.

His immediate problem? Figure out a smooth way to crash the wedding reception of his mother’s friend’s niece.

He drew a blank on her name, not surprising considering how mad he was at Marsh Bailey, his maternal grandfather and more recently, evil nemesis.

The parking lot was crowded with enough high-ticket cars to stock a ritzy dealership, but that was fine for him. Big receptions meant a lot of the bride’s friends would be looking for a good time.

There was nothing like a wedding to make shy girls bold and nice girls naughty. Unfortunately, the last thing he wanted right now was a fling. He wasn’t here for a good time.

Damn. How could the old codger do this to the family? He and Zack had to marry and settle down, or their grandfather would sell their shares in the family business. That would leave controlling interest in Bailey Baby Products in the hands of strangers on the board of directors.

It didn’t really matter to Zack and Cole, because they had great hopes for their construction firm, but their mother would be devastated. The company was her life now, and she ran it as well as her father ever had.

Only an autocrat like Marsh Bailey could believe the company would be better off with a male at the helm. He was deluding himself if he thought marriage would turn any of his three grandsons—the twins and their half-brother, Nick—into management material.

Worse, how could Marsh do this to his daughter, his only child? Since their stepfather’s death two years ago, Cole’s mom lived for her job as CEO of Bailey Baby Products. To retain control of the business when her father was out of the picture, she needed votes from the stock that at least two of her sons stood to inherit.

Nick was the lucky one. He was still in college, and Marsh hadn’t started pressuring him to get married yet.

Cole rubbed his chin, which was smooth for a change since he’d taken the trouble to shave after work. He shrugged his shoulders, feeling confined by the jacket of his seldom-worn charcoal gray suit. Maybe all the manual labor he did trying to make a go of his and Zack’s company had beefed up his shoulders. He ran his finger under the collar of his white dress shirt and loosened his conservative wine-colored tie a little.

He was twenty-eight years old and had spent his whole life trying to prove to his grandfather that he wasn’t like his father, Stan Hayward—not that Cole had ever set eyes on the guy. Marsh had made sure of that. He’d sent Stan packing, threatening him with jail if he came near his pregnant seventeen-year-old daughter again. The Bailey surname was the one listed on their birth certificates.

Cole snorted, but walked toward the clubhouse. He’d lost the flip to Zack with his own coin. He had to be the first to go wife-hunting, and he couldn’t let his mother down—not that she even knew about this marital blackmail.

Marsh insisted his grandsons marry soon, and their brides had to be nice girls, his code word for virgins. Just because Grandad’s own brother had messed up his life by marrying “a henna-haired hooker,” the old man was paranoid about letting a bad girl—or in his daughter’s case, a bad boy—into the family.

Cole stopped to admire one of the finest corvette to ever to roll off the line in the Motor City, but he knew he was only procrastinating. He wanted to go to this reception as badly as he wanted a case of poison ivy. Everything about weddings soured his disposition, especially the necessity of having one himself in the not-distant-enough future.

“Hey, will you help me?” a female voice called.

He heard the distress call before he saw the damsel.

“Please. It will only take a minute.”

He hurried down the row of cars, spotting a vibrant pink dress with the taffeta tail caught in the trunk.

“My bow is stuck,” the voice said from behind a gift-wrapped box the size of a washing machine, “and I dropped my keys under the car.”

He put the bulky but not heavy package on the ground.

The bridesmaid made a stab at twirling and trying to retrieve her keys with the toe of one pink satin shoe, but only succeeded in kicking them farther under the blue compact.

Cole bent to look under the car and felt around until he finally spotted a bright keychain in reach. Retrieving her keys took a few seconds longer than necessary because he found the view from that angle pretty spectacular. If the rest of the woman’s legs matched her shapely ankles, it was criminal to dress her like a wad of cotton candy. Back in the days when he’d semiwillingly wasted half his weekends every summer going to weddings, he’d developed a theory about bridesmaids—their only real function was to wear really ghastly dresses so that the bride looked better.

“Thanks, I really appreciate... You’re one of the Bailey twins.” she said, sounding more astonished than the situation merited.

He stood, trying to get a look at her face.

“Yes,” he agreed, wondering how she knew him and coming up blank.

“We went to high school together. Remember British lit?”

“My worst subject. I shouldn’t have taken it, but I needed one more English class to graduate.”

She whipped off the hat, revealing a mass of reddish-brown hair tortured into sausage curls.

He still drew a blank.

“No wonder you don’t recognize me. This hairdo Lucinda dreamed up for her bridesmaids belongs in a nursery rhyme. I’m Tess Morgan. I helped you with Shakespeare.”

“Tess Morgan? No way.” He remembered pudgy little Tess. He and Zack used to tease her just to see her blush. Her cheeks would get flaming red.

“I guess I’ve changed some.”

One thing hadn’t changed. Her cheeks reddened in embarrassment at the comment he’d intended as a compliment. He remembered one of their nicknames for her— Miss Prim and Proper.

“I only tutored you because you promised never to tease me again if you passed the class.”

“Did I keep my promise?” He honestly didn’t remember.

“You graduated a year before I did, so I guess you more or less did. Anyway, would you please open the trunk? I feel like an idiot trapped by my own car.”

“Oh, sure.” He unlocked it and lifted out the wide ribbon.

“Thanks. I appreciate it.”

He caught himself staring and had to remind himself that this was Tess Morgan. In high school she’d been so naive and wholesome, the guys had called her Soapy.

“Let me tie it for you.” He surprised himself by offering.

“Oh, would you? I don’t know why they had to be long enough to go around a hippo.”

He felt clumsy trying to make a bow out of the slippery material, especially since the one that had been caught in the trunk had a black smear.

“Can you do it?” she asked, looking over her shoulder.

He fumbled with the thing, managing to turn the grease spot so it didn’t show. No need to make her self-conscious by mentioning it. The big bow did her slender waist a grave disservice, in his opinion.

“Is Lucinda a good friend of yours?” he asked. He now knew the bride’s name, but he had serious doubts about her character. What kind of woman made a friend show up in public looking like Little Bo Peep?

“We go way back.” She didn’t elaborate. “I’ve done this bit so many times, people are starting to think I’m a professional bridesmaid.”

“Can I carry that for you?” He nodded at the gift-wrapped box. Chivalry aside, the bulky package looked as if it could be a good ticket into the reception. Who would question a guy who came in with a bridesmaid and a really big present?

“Would you mind? It’s not heavy, but it’s bulky. Lucinda is into wicker, so I got her a chair. Unfortunately, the store doesn’t deliver.”

Not so unfortunate for him. “I’d be glad to.”

He hefted the box and walked beside her toward the clubhouse. How could one person change so much and so little at the same time? She had the same tentative smile, but he didn’t remember her lips being so lush, no thanks to the pink lipstick that was probably supposed to match the dress. Her eyes were bluer than he recalled, but maybe ten years ago she hadn’t looked at him so directly. She had apple cheeks, part of the reason he and Zack had enjoyed making her blush, but there was nothing plump about any part of her now, including her face. She had golden-tan skin, a cute nose and arched brows, altogether a pretty package.

“I didn’t see you at the church,” she commented.

“I’m not big on weddings. It’s a bachelor phobia.”

“A little. Girls liked you a lot in high school—more than Zack even, but I shouldn’t tell you that.”

“It’s my brother you shouldn’t tell. He thought he was quite a ladies’ man back then.”

Since winning the coin toss, Zack was the happy twin, free to continue playing the field. He was also the one who could get a date with a complete stranger anytime just by saying, “How about it?”

Cole wasn’t at all eager to begin wife-hunting, but he hoped to get a date or two at this reception. Zack would have too much fun trying to give him advice on how to get a woman if he struck out.

“No, we’re both lonely bachelors. What about you? Are you married?”

He protested weakly, but he wasn’t at all surprised. As far as he knew, she hadn’t had a boyfriend in high school.

“Meeting the right person isn’t easy,” he said glumly, thinking of his grandfather’s unrealistic expectations. Maybe in Marsh’s day, virgins panting for husbands were plentiful, but the old man needed a wake-up call. This was the twenty-first century. It was a lot easier to find a playmate than a lifelong partner.

They climbed the steps at the main entrance of the imposing pseudo-Elizabethan clubhouse, its stucco walls gleaming white and the timbers freshly stained a deep mahogany brown. He’d lucked out in connecting with Tess and her big box. Private security was hovering like dark-suited ghosts, and when he saw the gift room off the foyer, it was pretty clear why. Besides wicker, the bride was obviously into silver and other pricey stuff. He didn’t need Tess’s prompting to carry her gift in with the others and put it in a corner.