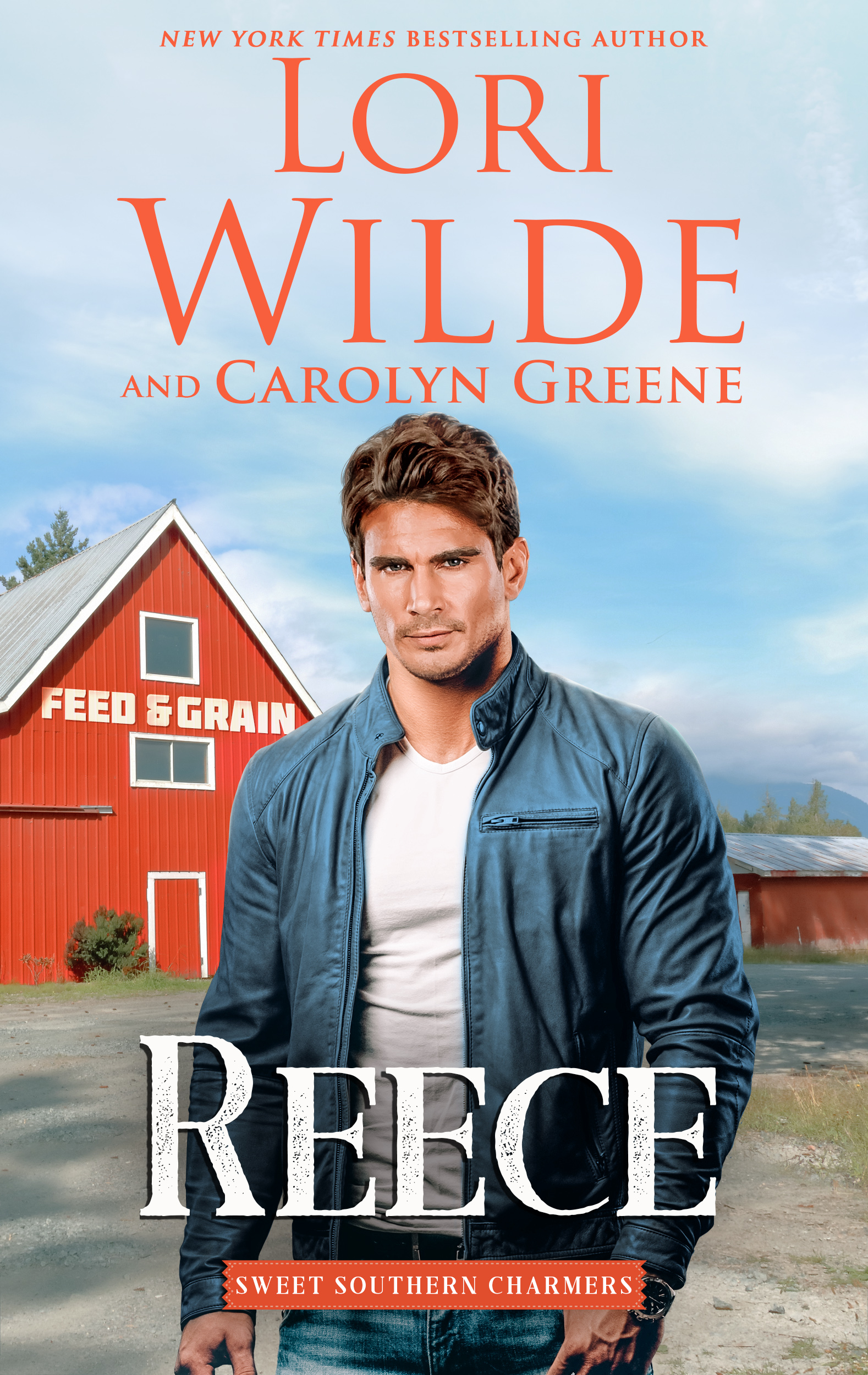 “Quick, give me your gravy strainer!”

No hello or glad to meet you. The frantic woman just stood there in Reece’s doorway, her hand outstretched in expectation, her dark pageboy hairstyle falling in disarray around her delicate face.

Something resembling a black dog cowered behind her legs … very attractive legs, at that. Come to think of it, she looked even better close up. Earlier, he’d watched her mow the grass next door from his bedroom window.

He promptly forgot the paperwork he’d been doing and stuck out his hand. “You must be my new neigh—”

“Don’t just stand there—we’ve got lives to save!” The brunette ignored his friendly gesture and pushed past him into the house.

Grabbing his arm, she half dragged him to the kitchen and started digging through his cabinets. The floor grew cluttered with piles of pots and baking pans in her wake.

“Here’s a colander.” She shoved the thing into his arms. “But the holes are too big. Where’s your gravy strainer?”

What was with this woman?

“Umm…” Reece pushed a lock of hair off his forehead. What had he done with that thing after he’d filtered the oil in his tractor?

“How about a flour sifter?” she persisted. When he hesitated to consider what a flour sifter might be, she snapped her fingers under his nose. “Hurry, before they all die!” Reece’s clumsy search through the cabinets finally turned up a sifter as well as the misplaced strainer.

“Thanks a million,” exclaimed the human hurricane as she slipped out the back door with her bounty. She popped her head back in. “C’mon, I need your help.”

It didn’t dawn on him to ask why. Even if he tried, he probably couldn’t squeeze a word in sideways. Well, what the hell. She had aroused his curiosity. Reece shrugged and jogged barefoot after her across his lawn to her backyard.

He caught up with her at the rail fence and gave her cute bottom a boost across the wood structure. Then he followed her to a small, collapsible pool where she dipped out a bucketful of scummy water.

She set the bucket on the ground and pointed to a hole in the side of the pool. From the hole trickled water and little round black things. On closer inspection, he saw that the black things wriggled in a puddle on the ground.

“My mower tossed a rock through the side of this thing. The tadpoles will die if we don’t do something quickly.” She held the strainer to the hole and tried to catch the slippery creatures. “Damn—pardon me. This isn’t working.”

Reece forced his eyes off the sight of her, kneeling in mud and pawing frantically at the flow of water.

“Women,” he mumbled and rolled his eyes. “Especial those save-the-whale types.”

He pulled off his T-shirt which read, If You’re Not Hungry, Thank A Farmer, and stuffed it into the hole. He picked up the flour sifter and started scooping out the hapless creatures and transferring them to the bucket.

To his surprise, the woman sat cross-legged, the back of her tie-dyed shorts planted squarely in the mud. She was sure different from hometown women. Obviously a city slicker, but not New York kind of city. No, she didn’t seem sophisticated or haughty the way he imagined a metropolitan woman to be. But she was sidewalks and streetlights, apartments and buses.

She seemed unaware of ruining her clothes, she was so intent on capturing, in her bare hands, the tadpoles squirming in the puddle before her.

Not many women he knew would voluntarily touch a live tadpole. Or a dead one, either, for that matter. In fact, he didn’t know many girls from Bliss County who’d willingly trade places with the one beside him.

“There.” She triumphantly plunged her hands into the bucket and washed the mud and tadpoles from them. “The worst of the crisis is over. Thanks for your help.”

Reece couldn’t help noticing how the smile reached her greenish-brown eyes even before her lips turned up.

“I’m sorry I acted so rude before. I get carried away sometimes.”

He could easily visualize men in white suits hauling her away. Her behavior had been that nutty.

She held out her hand, made a face at the scum and bits of grass clinging to her fingers and large amethyst ring, and wiped the gunk on the front of her shirt. She examined her hand and, satisfied that it was clean enough, stuck it out toward Reece once again. “I’m Lanie, and I just moved in yesterday.”

Reece put down the sifter and took her hand in his. Although her bone structure was small, almost fragile, she gripped his hand firmly.

“My name’s Reece.” He let his eyes wander over her lush figure and noticed she was studying his bare chest just as thoroughly. “Welcome to Bliss.” Indeed, the day was getting more blissful by the minute. She improved the scenery immensely.

Water gurgled in the bucket behind Lanie. Her pet had plunged its muzzle up to its eyeballs in the water and was slurping greedily.

Reece stared. It wasn’t a dog after all. In fact, it looked like a tiny, knee-high horse.

“Cripes, Winnie, that’s not your water bucket.” Lanie let go of Reece’s hand and grabbed a handful of mane to pull the animal away. “We’re trying to save those critters, and you’re drinking them!”

“A horse? That little thing’s a horse?”

Lanie pointed the young animal in the direction of her house and swatted it on the rump to send it away from her lifesaving mission. But the horse decided, instead, to take a cooling walk in the pool.

“That does it.” Lanie stepped into the pool, penny loafers and all, and picked up the horse.

Tiny hooves swung wildly in the horse’s struggle to get free as Lanie walked toward the house. But it was no use. Lanie opened her back door and set the animal down, shook her finger at it as she muttered something, and closed the screen door behind her. Its squeaky bleats followed her back to the pool.

Reece shook his head. And he’d thought this was going to be another boring Sunday afternoon. “Are you going to leave him in the house to do you-know-what all over the floor?”

“You’re a country boy, aren’t you? Don’t you know the difference between a filly and a colt?” Lanie knelt and went back to scooping the remaining tadpoles from the pool into the bucket. “Even if you didn’t, Winnie is a girl’s name, you know. And she’s housebroken.”

How might someone go about housebreaking a horse, he wondered.

Winnie sounded off again. The tiny animal stood dog-style with its front hooves against the door to get a better view of the goings-on outside.

“I’ve never heard of anyone keeping a horse in the house.” He couldn’t resist adding, “She’d probably be happier outdoors, where she belongs.”

“Aw, hell—pardon me. You’re not gonna start on that, too, are you? Hold this.”

Lanie thrust the sifter into his hands and began collapsing the sides of the pool until a makeshift spout formed near Reece. He obediently held the sifter under the spout while she lifted, pouring water and tadpoles out of the pool. He dumped the batch of wriggling amphibians into the bucket, and then they repeated the process.

“I was run out of my apartment because of people with attitudes like yours,” Lanie said. Her voice rose as she imitated her scorners. “My, my, dearie, don’t you know livestock belong outdoors? This is a residential area, and we don’t want any horses around here.”

Reece again dumped the contents of the sifter into the bucket. “If you feel that strongly about it, why didn’t you stay and fight?”

“Hmmph. I read about a woman in California who tried to change her zoning code to allow for a miniature horse. After she spent forty thousand dollars in legal fees, she couldn’t afford her mortgage.” Lanie lifted the pool higher, running the last of the water through Reece’s sifter. “No, thanks. I’d rather move to the country where ‘livestock’ is allowed.”

He stood and hoisted the bucket. “You have every legal right to keep a horse here, but I still think it’s a dumb idea to let it stay in the house. I don’t even let my cat come inside.”

“If your cat is the gray one with the white paws, I wish you would keep it in your house. I found evidence of him digging in the mulch around my rosebushes.”

The woman was raving, and it was unwise to continue the discussion. She obviously couldn’t see logic where her pet was concerned.

“There’s a pond across the road,” he said. “Let’s go set these rascals free.”

Lanie opened the screen door to let Winnie out, and both ran to catch up with Reece. “Mrs. Masardi’s car isn’t here,” she said as they trudged across the neighbor’s property. “Do you think she’ll mind if we dump tadpoles in her pond? I met her while moving in yesterday, but I don’t know her well enough to help myself to her pond.”

“Don’t worry, she won’t mind.” He knew she was almost as nuts as Lanie, except for allowing animals in the house.

Reece was certain their neighbor would gladly give the creatures a home, as long as she didn’t have to share her house with them. But would the increased tadpole population attract snakes? He was preparing to give the bucket the old heave-ho when Lanie stopped him with a hand on his arm.

“Don’t you dare fling those poor animals into that pond! Give me that.”

She took the pail from his hands and waded knee-deep into the water. She lowered the container into the water and let the pollywogs drift out into their new home.

In a squeaky voice, as an adult speaks to a small child, she said, “Come on, you poor little things. Get those tails moving.” She gently swished the water with her fingers, then looked up at Reece. “I think they are in shock.”

Reece thought that might explain his own condition. Ever since she’d pounded on his door twenty minutes ago, his brain seemed to move in slow motion.

She bent over to speak to the creatures, and her scoop-neck top dangled loosely from her body. His brain—and hormones—suddenly shifted into overdrive.

At that, Reece did what any red-blooded Southern gentleman in his position would do. He let his eyes linger ever so briefly and drank in the sight of her feminine curves. For one brief, insane moment, he thought about asking her out.

But, no, this woman and her craziness would be bound to upset his life, his mind, and his rigidly enforced work schedule. He wouldn’t let a pretty face and shapely figure jeopardize his two-year struggle to rebuild his family’s business.

Irritated with himself for letting her distract him from the week’s sales receipts, he snapped, “I don’t have time to stand here fooling with a bunch of tadpoles. If they’re not moving by now, they’re probably dead.”

Trying not to notice the hurt expression on her face, he spun on his heel and stalked back to the house.