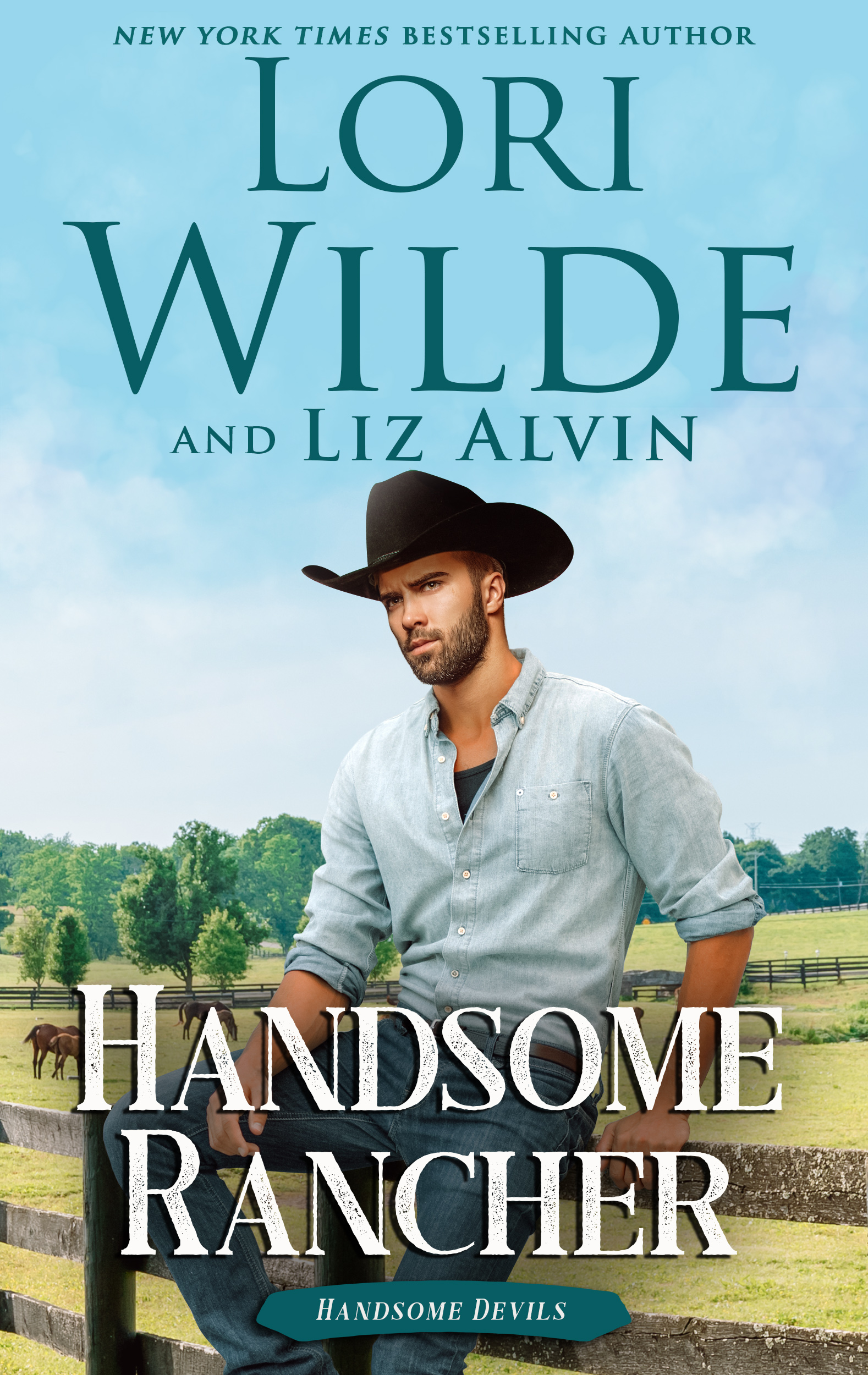 As she studied him, standing near the entrance to the city council room, Megan Kendall couldn’t help thinking what a handsome devil Chase Barrett was.

Everyone in the small town of Honey, Texas, thought so as well. With his drop-dead gorgeous looks and his handsome-devil smile, women fell for him like pine trees knocked down by a powerful tornado.

Even Megan couldn’t claim to be immune. She and Chase had been good friends for over twenty years, and he still didn’t know she was madly in love with him.

Yep, he was a handsome devil all right.

Thankfully, Leigh nodded toward the front of the room instead of in her brother’s direction. “The mayor. When you’re giving your presentation, if you get nervous, picture him naked.”

Megan slipped her glasses down her nose and studied Earl Guthrie, the seventy-three-year-old mayor of Honey. When Earl caught her gaze, he gave Megan a benign, vague smile.

“I don’t think so,” Megan said to Leigh. “I prefer to think of Earl as fully clothed.”

Leigh giggled. “Okay, maybe that wasn’t such a hot idea after all. Let me see if I can find someone else for you to think of naked.”

“That’s not necessary. I’m not nervous.” Megan flipped through her index cards.

Her argument was flawless, her plan foolproof. She had nothing to be nervous about. Besides, as the head librarian of the Honey Library, she knew every person in the room. This presentation would be a snap.

But with puppy-like enthusiasm, Leigh had already stood and was looking around. She hadn’t spotted her oldest brother yet, but Megan knew it was only a matter of time before she did.

“Leigh, I’m fine,” Megan tried, but Leigh finally saw Chase and yelled at him to come over and join them.

Chase made his way through the crowded room. The city council meetings usually drew a big audience, but Megan was happy to see even more people than usual had turned out to listen to her presentation of fundraiser ideas for new playground equipment.

When Chase got even with Megan and Leigh, he leaned across Megan to ruffle his sister’s dark hair. Then he dropped into the folding chair next to Megan and winked at her. “Ladies, how are you tonight?”

Megan tried to keep her expression pleasant, but it wasn’t easy. Ever since she’d moved back to Honey last year, pretending her feelings for Chase were platonic was proving harder and harder. At six-two, with deep black hair and even deeper blue eyes, he made her heart race and her palms sweat.

“Don’t ruffle my hair, bozo.” Leigh huffed at Megan’s right, smoothing her hair. “I’m in college. I’m too old to have my hair ruffled.”

To Megan’s left, Chase chuckled. “Squirt, you’re never going to be too old for me to ruffle your hair. When you’re eighty, I’m going to totter up to you and do it.”

“You and what orderly?” Leigh teased. “And just for the record, I like Nathan and Trent much better than I like you.”

“Oh, please.” Megan rolled her eyes at that one. Leigh loved all of her brothers, but everyone knew Chase was her favorite. When she was home from college, she always stayed with Chase.

“I love you, too, squirt,” Chase said, not rising to his sister’s taunt. Instead, he nudged Megan. “You okay?”

“I told her to imagine the mayor naked if she got nervous, but she doesn’t want to do that,” Leigh supplied.

“I can see why not,” Chase said. “Earl’s not exactly stud-muffin material.”

“Oooh, I know what she should do.” Leigh practically bounced in her chair. “Megan, if you get nervous, picture Chase naked.”

Megan froze and willed herself to stay calm. The absolute last thing she wanted to think about was Chase naked. Okay, maybe she did want to think of him naked, but not right now. Not right before she had to speak in front of a large portion of the entire town.

“I don’t think so,” Megan muttered, shooting a glare at Leigh.

The younger woman knew how Megan felt about her brother, and this was simply one more not-so-subtle attempt to get the two of them together. In the past few months, Leigh’s matchmaking maneuvers had grown more extreme.

On her other side, Chase offered, “Well, if you get flustered and it will make things easier for you, you go ahead and think of me naked, Megan. Whatever I can do to help.”

Megan knew Chase was teasing her, but suddenly she realized how many years she’d wasted waiting for him to take her seriously.

She’d fallen for him when she’d moved to town at eight. Dreamed about him since she’d turned sixteen. And tried like the dickens to forget him when she’d been away at college and then later working at a library in Dallas for five years.

But nothing had helped. Not even seriously dating a man in Dallas had helped. In her soul, Megan believed she and Chase were meant to be together.

If only she could get him to notice her.

“Hey there, Chase,” a smooth, feline voice fairly purred over their shoulders. “You’re looking yummy. Like an especially luscious dessert, and I positively love dessert.”

Oh, great. Megan glanced behind her. Janet Defries. Just what she needed tonight.

Chase smiled at the woman half leaning on his chair. “Hey, Janet. Do you plan on helping Megan with her committee?”

From the look on Janet’s face, the only thing she planned on helping herself to was Chase, served on a platter.

She leaned toward Chase, the position no doubt deliberate since a generous amount of cleavage was exposed. “Are you going to help with this committee, Chase? Because if you are, I might be able to pry free a few hours.”

Yeah, right. Megan shared a glance with Leigh. They both knew Janet would no more help with the committee than dogs would sing.

“Shame.” Janet slipped into the chair directly behind him. “I think you and I should figure out a way to spend some quality time together.”

Her message couldn’t have been clearer if she’d plastered it on a billboard. Megan hated herself for wanting to know, but she couldn’t not look. She turned to see what Chase’s reaction was to the woman’s blatant come-on.

Mild interest. Megan repressed a sigh. Of course. Janet was exactly the type of woman Chase favored. One with a high-octane body and zero interest in a lasting relationship.

“Maybe we’ll figure it out one of these days,” Chase said, and Megan felt her temperature climb.

Okay, so she didn’t have a drawer at home full of D-cups, but Megan knew she could make Chase happy. She could make him believe in love again.

If the dimwit would give her the chance.

Janet placed one hand on Chase’s arm and licked her lips. “Well, you hurry up, else I might decide to go after Nathan or Trent instead. You’re not the only handsome fella in your family.”

Chase chuckled as he faced forward in his chair once again. “I sure am being threatened with my brothers tonight. But I’d like to point out that neither of them stopped by to lend their support, and I’m sitting here like an angel.”

Leigh snorted. “Angel? You? Give me a break. You could make the devil himself blush, Chase Barrett.”

Chase’s grin was pure male satisfaction. “I do my best.”

As Megan knew only too well. She’d watched him beguile a large percentage of the females in this part of Texas. Why couldn’t he throw a little of that wickedness her way? Just once, she’d like to show him how combustible they could be together.

But even though she’d been back in Honey for almost a year, the man still treated her like a teenager. She’d just celebrated her twenty-ninth birthday. She wasn’t a sheltered virgin with fairy-tale dreams of romance. She was a flesh and blood woman who knew what she wanted out of life.

After a great deal of commotion getting the microphone to the right level, the mayor finally started the meeting. Within a few minutes, it was time for her presentation. Megan stood, adjusting her glasses.

“Remember, picture Chase naked if you get nervous,” Leigh whispered but not very softly.

Megan was in the process of scooting past Chase, who had stood to let her by. She froze, standing directly in front of the man who consumed her dreams and starred in her fantasies.

“You know, I think I just may do that,” Megan said. “And if he gets nervous, he can picture me naked, too.”