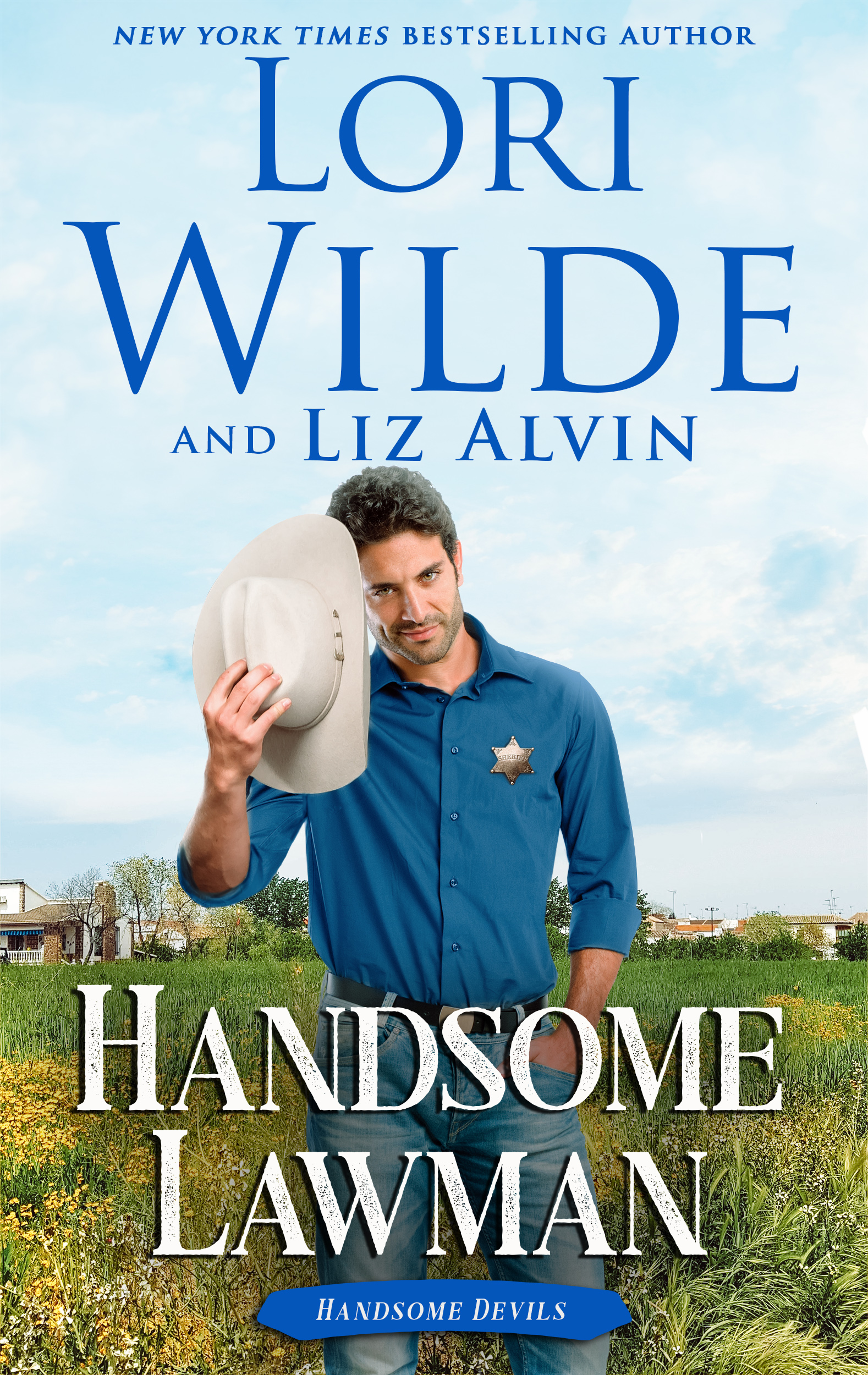 “Trent Barrett, I insist you arrest Erin Weber immediately. The woman is a thief and belongs in jail,” Delia Haverhill hollered, her arms crossed under her ample chest. “Arrest her right now.”

Trent scratched his jaw and considered the middle-aged woman in front of him. Delia wasn’t what you would call the sweetest person in Honey, Texas. Truth be told, she put the cur in curmudgeon.

But still, as chief of police of Honey, he couldn’t simply ignore Delia’s complaint. And the woman hadn’t, to his knowledge, ever had anyone arrested before. There very well could be some truth in what she was saying. A least a little.

“Why don’t you tell me what the problem is and who Erin Weber might be,” he said in a calm, soft voice, hoping Delia might follow suit and stop hollering at the top of her lungs. “Then we can figure out what’s the best course of action to take.”

Unfortunately, Delia didn’t lower her volume one bit. She leaned halfway across his desk and said, “I’ve already told you what action needs to be taken. Erin Weber needs to be arrested. Now get up from behind that desk and come with me. I’ll show you who this woman is and what she did. You won’t believe her nerve. I was nice enough to visit her store last Saturday with my grandson, and she rewards me by stealing my Pookie. And to make it worse, she’s displaying Pookie right outside her store. The woman belongs in jail, I tell you.” Trent thought he was up to date on all the street names for drugs, but he’d never heard of pookie. “What in the world is pookie?”

Delia wagged a finger at him. “Get out of your chair, and I’ll show you.”

Reluctantly, Trent stood. “I’ll be happy to get one of my officers to help you, Delia. But I have a meeting with the mayor in about an hour.”

Delia frowned. “Did I or did I not change your diapers when you were too young to know your feet from your hands?”

His secretary, Ann Seaver, had walked in midway through Delia’s comment. She raised one eyebrow and looked precariously close to giggling.

Trent shook his head and sighed. “Delia, I sure do hope you’re talking about when you used to babysit me decades ago. If you mean something else, then one of us is seriously warped.”

Delia was obviously not amused. She looked at Trent like he was something stuck on the bottom of her shoes. “Of course I’m talking about when I babysat you. And I would think that means you’ll be happy to help me now.”

She gave him a squinty-eyed look. “After all, I never let you cry yourself to sleep like some babysitters do. I rocked you to sleep and sang you pretty songs.”

Ann made a spurting sound behind the hand she had across her mouth. Trent was certain she wasn’t the only one who would be laughing today about what Delia had said. No doubt Ann would tell most of the officers, and by the end of the day, everyone would be quoting Delia Haverhill.

“Come on, Delia. Show me what this pookie is.” He circled his desk and stood next to the older woman. “I think you’ve already shared enough babysitting stories for one day.”

Delia didn’t even crack a smile. She simply nodded and headed toward the door. When they drew even with Ann, his secretary was still laughing.

“What in the world are you laughing about, young lady?” Delia asked her. “Seems to me I changed more than a few of your diapers, too.”

“So, Delia, how long do you expect this to take?” he had to ask as they headed for the front door.

“It will take however long you need to read Erin Weber her Melissa rights.”

The bright sunshine hit him once they were outside, so Trent pulled his sunglasses out of his pocket and slipped them on. “Miranda.”

Delia waved one hand and started down the street. “Melissa. Miranda. What difference does it make? Just read her the rights and toss her in jail. Now come on.”

Reluctantly, Trent followed. He sure didn’t like being ordered around, but as the chief of police, he had to keep the people of Honey happy.

“Tell me, what is this pookie stuff you think some woman stole from you?” he asked once they were headed down Main Street.

“First off, it isn’t pookie stuff. His name is Pookie. Pay attention, Trent.”

He thought he had been, but reading smoke signals would be easier than understanding Delia Haverhill. “Sorry if I misunderstood.”

“Second off, it isn’t just some woman who stole my Pookie. It’s Erin Weber, the woman who opened the pet shop over on Collier Street. Naturally, I suspected her as soon as Pookie disappeared.”

By now, he and Delia had turned off Main Street and were halfway down Collier. Delia pointed to the front door of a store.

“There’s Pookie. Big as life. On display for the whole town to see. Erin certainly has some nerve.”

Trent looked where she was pointing and bit back a grin. Pookie was a plastic statue of a rabbit, the kind you might put in your garden or flowerbed. The statue was old and well-worn and couldn’t be worth more than a couple of bucks.

But Delia was cooing and fussing over the blasted thing like it was real.

“Now go on inside and arrest her,” Delia said.

Trent slipped off his sunglasses and glanced around. As he could have predicted, he and Delia were starting to draw a crowd. Honey didn’t offer a lot of diversions, so anytime anything even moderately interesting happened, everyone rushed out to see what was going on. He better head on in and talk to this Erin Weber before he found himself knee-deep in nosy citizens.

Damn, what a way to start the day.

With about as much enthusiasm as a ten-year-old boy stuck at a Girl Scout meeting, Trent shoved open the door of Precious Pets and walked inside.

He’d only made it a few steps when a woman yelled, “Freeze!”

Trent froze as instructed and started to go for his gun when a petite, brown-haired dynamo rushed at him from the back of the store.

“Don’t move or you’ll frighten Brutus,” the woman said. “You almost stepped on him. He’s right by your left foot.” She tipped her head, her expression more than a little accusatory. “He just escaped from the bath. Didn’t you see Brutus when you came in?”

Obviously not or he wouldn’t have almost stepped on him. Trent glanced around and didn’t immediately see anything. But after learning what Pookie was, Trent wasn’t certain he wanted to know what a Brutus might be. Probably a big ol’ ugly snake. Or maybe a tarantula.

But curiosity got to him, so he looked down anyway, then breathed a sigh of relief.

Brutus was a little bitty fluffball.

“What kind of animal is that?” he had to ask.

The woman frowned. “A puppy, of course. What in the world did you think he was?”

Trent studied the round, white ball of fur with two black specks for eyes. “He kinda looks like a dust bunny.”

The woman moved forward and picked up the puppy off the floor. “A dust bunny. Sheesh. He’s a sweetheart, aren’t you, baby?”

Obviously knowing he was being praised, Brutus let out a series of yips and yaps. Trent would give the puppy credit—he had an impressive bark for something that looked like a ball of lint. No wonder the dog had a tough name like Brutus. He needed every advantage he could get.

“Is there something I can help you with?” the woman asked, still cradling the dog.

“I’m Trent Barrett, chief of police here in Honey.” He extended his hand, which the woman shook in a firm, no-nonsense handshake. Just like the pup, the woman might look small and fragile, but she was stronger than she appeared. Her grip would do a lumberjack proud.

“I’m Erin Weber. I own Precious Pets.” Brutus started squirming, so Erin put the puppy down. The furball immediately trotted over and tugged on Trent’s shoelaces.

“Brutus might not be a pedigree, but he’s hardly a mutt,” Erin defended. “He’s a rescue.”

“I didn’t mean mutt in a negative way.”

“Mutt is a word that has no positive connotations,” she countered. “Even though he’s from the animal shelter, Brutus has a great deal of dignity.” Trent grinned as he watched the pup chew on the shoelaces of his best boots. “Is that a fact? He has dignity?”

Trent tried to wipe the grin off his face, but the dang thing refused to budge. “I’ll keep that in mind.”

There was a loud rapping on the front door, then Delia hollered, “Have you arrested her yet?”

“Delia Haverhill. Do you know her?”

“Yes. I met her last weekend. Who does she want you to arrest?”

Brutus had settled down on one of Trent’s shoes, apparently to take a nap, so Trent bent down and scooped him up. The dog panted and yipped at him and looked like he might leak from either end, so Trent handed Brutus back to Erin.

“Arrest her, Trent. Do it right now,” Delia continued hollering through the door. “How dare she take Pookie!”

Erin was staring at the door to her shop, obviously befuddled. “Um, what does she—”

Trent blew out a sigh. “I’m afraid Delia wants me to arrest you for stealing her Pookie.”