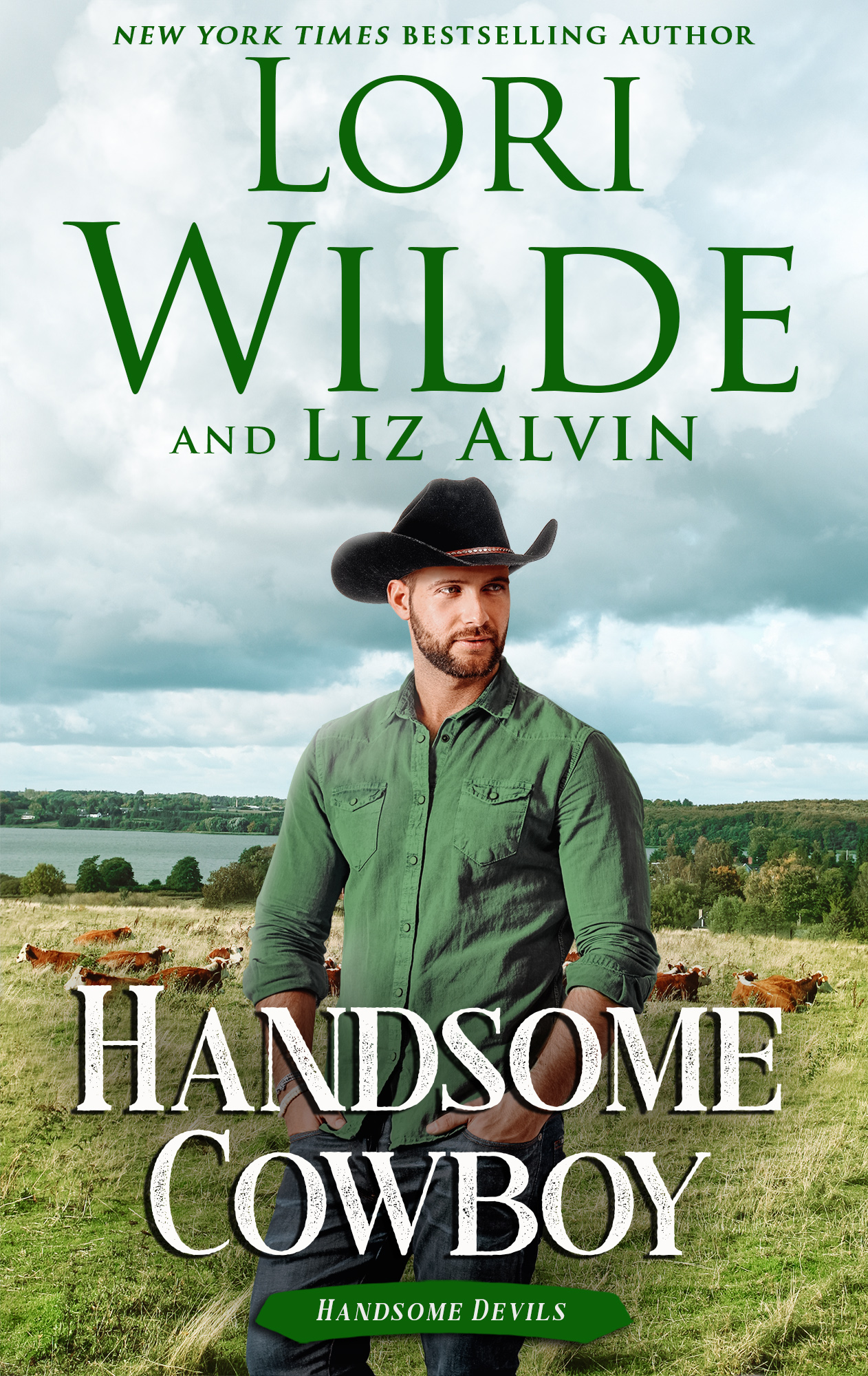 She was going to kill her brothers. All three of them. Slowly. In front of the entire town of Honey, Texas.

How dare they invite Jared Kendrick to Trent’s wedding? No, not only invite him, but also have him in the wedding party. Were they insane? Was this some kind of lame joke?

Whatever the cause, they were dead men for sure.

“The wedding was beautiful,” said Amanda Newman, wife of the minister who’d performed the ceremony. “Trent and Erin seem so happy. Now all your brothers are blissfully married. Guess it won’t be long until you follow their example.”

Leigh barely resisted the urge to gag. As if. She’d rather go swimming with piranha. Here she’d finally married off her last meddlesome brother, and from this point on, she’d be an independent woman.

No way was she giving up her freedom anytime in this century.

“I’m too young to get married,” she told Amanda. Standing on her tiptoes, she scanned the wedding reception crowd, looking for her brothers.

How hard was it to spot three tall men in tuxes? Apparently impossible, since she didn’t see them.

Maybe the weasels were hiding from her. Yeah. That was a distinct possibility. At least it was if they had the slightest inkling as to what she was thinking at the moment.

“Oh, now I’m sure this wedding is giving you ideas.” Amanda patted Leigh’s arm and smiled. “I can see you’re studying the decorations, maybe coming up with plans for your own reception.”

Leigh stared at her, stunned. Amanda was a sweet older woman, but boy, she didn’t have a clue what Leigh was thinking. Not that she could exactly enlighten her. After all, how did you tell the minister’s wife that you were looking for your brothers so you could kill them? Hmmm. Emily Post probably didn’t have any etiquette advice for this particular circumstance.

Deciding not to go into it, Leigh said, “I’m not interested in getting married. Thanks.”

Figuring that was settled, she returned to scanning the crowd. Where were those bozos? She finally spotted two of her sisters-in-law, Megan and Emma, over by the buffet table. Wherever they were, their husbands and her brothers, Chase and Nathan, wouldn’t be far behind.

She started to head in that direction when Amanda once again put her hand on Leigh’s arm. “Getting married and starting your own family is one of life’s precious gifts,” Amanda said. “As I know your brothers have discovered.”

She only wanted to talk to her ratfink brothers and then maybe kick Jared Kendrick out of here. Was that too much to ask for?

“No offense, Amanda, ’cause I know you’re happily married,” Leigh said. “But I have no desire to live in a house with a white picket fence.”

“Do tell. Because I could have sworn that the house you’re renting from Megan has a white picket fence out front,” a deep voice said from behind her.

Oh, just great. While she’d been looking for her brothers, Jared Kendrick had walked up and was apparently standing directly behind her. Man-o-man, this day just kept getting worse.

“Hello, Jared,” Amanda said. “I heard you moved back to Honey. You’re turning your parents ranch into a rodeo school, right?” Without waiting for an answer, Amanda continued. “Mary Monroe said she saw you riding that motorcycle of yours around town. And she said you were going quite fast. I told her you probably weren’t, but I don’t think she believed me.”

Leigh rolled her eyes. Of course, the man had been driving fast This was Jared Kendrick. If there was a rule in Honey, he broke it

“I might have been going a couple of miles over the speed limit,” Jared admitted. “Tell her I’ll slow down from now on.”

Unable to stop herself, Leigh snorted. “That will be the day.”

Turning slowly, Leigh braced herself for the wallop she knew she’d feel when she made eye contact with this man. Despite no longer liking him, she was still female. And females of all ages found it difficult to resist Jared. He was tall, over six feet, and had amazingly thick dark brown hair and equally dark eyes. The man was serious eye candy.

Predictably, as soon as Leigh looked at him, her DNA betrayed her. Her stupid heart raced. Her equally stupid breathing seemed to have grown rapid and shallow.

This world was one screwy place when the man you disliked more than any other turned you on like crazy.

Taking a deep breath to calm her raging libido, she flashed him a completely insincere smile. “Why, hello, Kendrick. I thought you’d be in jail by now. Did the Parole Board take a liking to you?”

Jared laughed, the sound deep and rich and way too appealing. “Glad to see you haven’t changed since last summer, Leigh.”

Amanda frowned and made a tsking sound. “Oh, Jared, were you really in jail? My, my. I thought you were riding with those rodeo people. Of course, you were a trifle wild while growing up here, but I had no idea you’d run into serious trouble.”

Leigh waited patiently for Jared to correct the older woman and explained he hadn’t been in jail, but he simply shrugged. Oh, for the love of Pete. Was he really going to let this go? The Honey rumor mill would have a field day. Leigh knew that before the night was over, all the good folks of Honey would swear up and down that Jared had been in jail for murder.

“Maybe my husband could counsel you,” Amanda offered. “He’s very good with things like his.”

Leigh groaned. “Amanda, Jared wasn’t in jail. I was kidding.”

“Oh, good. You two are joking,” Amanda said. ‘I’m happy to hear that. Although I will admit I was surprised to see you in the wedding party today. I didn’t know you were friends with Trent.”

“Everyone seemed surprised to see me,” he said. Leigh more so than most. I especially liked the way she screamed when she noticed me standing next to her brothers by the altar. You’ll have to check with your husband, Amanda, but I bet she’s the first bridesmaid to scream like that during a ceremony.”

“Oh, pulleese. I’m sure a lot of women scream around you,” Leigh said, and then she felt like whacking herself on the side of the head when she realized the interpretation that could be put on her words. From the grin on Jared’s face, he’d taken it as a compliment to his lovemaking prowess.

Leigh shook her head. “Hey! Don’t go there. I only meant—”

Jared held up one hand and drawled, “I know exactly what you meant, Leigh, and thanks. Maybe one day you can find out for yourself if it’s true.”

Keenly aware that Amanda was watching them Leigh said in her sweetest voice, “Kendrick, I’d rather two-step with a rattlesnake. No, wait, it wouldn’t be much different, would it?”

Amanda frowned and looked from Leigh to Jared then back at Leigh. “What are you talking about dear? Are you teasing Jared again?”

“I’m completely, absolutely sincere,” she said firmly, which only made Jared grin more.

“Oh.” Amanda looked confused. “I see. Well, I guess we’d better find our seats now. It looks like the toasts are about to start,” Amanda pointed out.

Leigh glanced around. People were quickly finding their places at the small round tables. With quick goodbye to Amanda, Leigh headed over to the table near the front where she was supposed to sit. Now she’d have to wait until later to talk to her brothers, but at least she’d be away from Jared.

Boy, he really got to her. Big time. Why in the world had her doofus brothers invited him to be in the wedding party? Had love turned their brains to mush? They hated Jared, and ever since their dating fiasco a few months back, he was the last man she ever wanted to see again.

So what in the world was he doing here?

And why in the blazes did he still get to her so much?