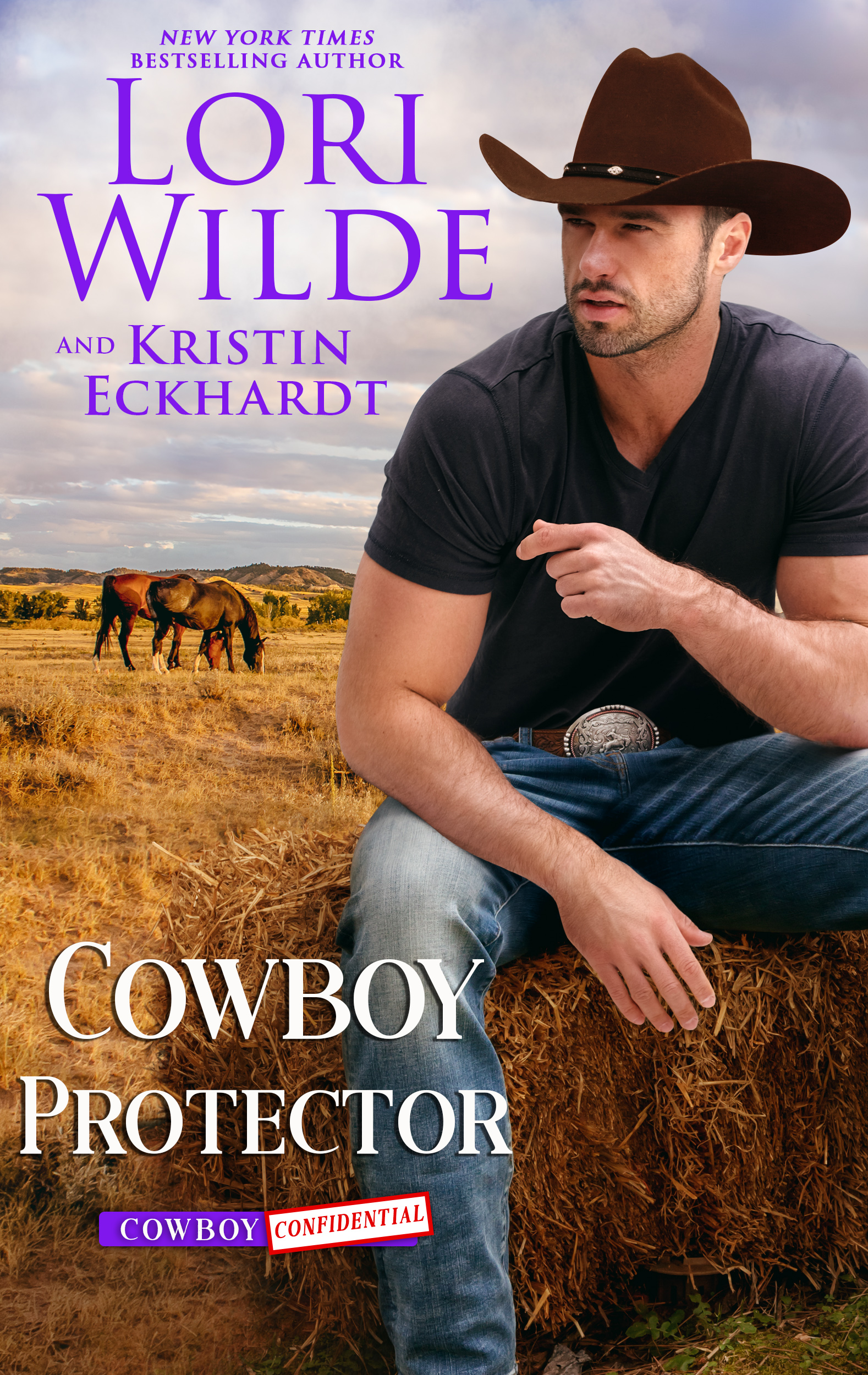 Hank Holden slowly opened his eyes, shifting on the bed and wincing at the bright sunlight streaming in through the ranch house window. Everything was fuzzy, making it hard for him to focus.     Huh?

His vision cleared and he saw three familiar faces staring down at him. “What am I doing here?”

“You took a hoof to the head, big brother,” Cade Holden said, standing at the end of the bed. “I think that bull had it in for you. Maybe you’re losing your touch as a veterinarian, Dr. Holden.”

Sam Holden chuckled as he tipped up his cowboy hat. “Nah, it’s cause Hank’s getting old. You need faster men or slower cattle to get any work done around here.”

“He’s only thirty-five,” Grandma Hattie countered, laying a gentle palm on Hank’s cheek. “How are you feeling, dear?”

“Like I just got trampled by a half-ton bull.”

“I’d call it a draw.” Sam propped one cowboy boot on the bed frame. “That bull took quite a blow running into your hard head. But don’t worry, he shook it off.”

“Good to hear.” Hank winced at the stabbing pain in his head. “And what are you doing here, Sam? I thought you were in El Paso.”
“I just finished a job there and decided to stop by the ranch for a couple of days before I head out again.”

Grandma Hattie reached out to give Sam a side hug. “I hope that’s enough time for me to put some meat on your bones. I don’t want you turning scrawny.”

“No chance of that, Grandma.” Sam pumped both arms in the air to show off his bulging muscles. “Now that Hank’s down for the count, I’m the tough one in the family.”

Hank half sat up in bed. “I can still kick your behind all the way to Laredo, if you’d like to try me.”

Cade, the second youngest of the six Holden brothers, laughed as he grabbed Sam’s arm and pulled him back. “Give Hank a break, Sam. He’s got a mild concussion and some wounded pride. The doc said he needed take it easy.”
“Wait, Dr. Culbertson was here?” Hank asked. The last thing he remembered was opening the cattle shoot, then everything went black.

“Yes, I thought it best to call him. He said that hoof just grazed you or it would have been a lot worse.” Hattie reached out and gently smoothed the hair off Hank’s forehead. “He was here a couple of hours ago. Don’t you remember?”

Worry furrowed her brow. “Do you know what day it is?”

He thought about it for a moment, trying to remember what day he’d promised to help work cattle. “Saturday?”

Relieved, Hank leaned back against the down pillows, wincing at the movement. His body felt like one giant bruise and his head was pounding. Then he remembered there might be another reason for his condition—too many shots at the Wildcat Tavern last night with his business partner and fellow veterinarian, Charlie Dennison. They’d shut down the place and he’d only gotten a couple of hours sleep before heading to the Holden family ranch to help work cattle this morning.

“Doc said you might not remember much around the accident,” Cade said. “He checked you over and didn’t find too much damage. But he said you’d be mighty sore for a while.”

Hattie nodded. “That’s why I called Charlie. He’s happy to cover your appointments at the vet clinic until you’re fully recovered. And he told me you’re overdue for a vacation anyway.” She smiled. “It’s perfect timing, really.”

“Perfect...timing?” Hank said, feeling even more confused. Maybe his head wasn’t quite as hard as his brothers thought.`

“For your job with Cowboy Confidential. We talked about it after the doctor left this morning.” Hattie’s blue eyes filled with concern. “Don’t you remember?”

He didn’t remember, but the last thing he wanted to do was make her worry. “It’s…coming back to me….”

“Cowboy Confidential is real?” Sam interjected, staring at Hattie. “Nick told me you’d started a new business with that name, but I thought he was joking.”
“It’s as real as the honey buns baking in my oven right now,” she said. “My own staffing company that I’m running right out of this house. And Nick knows that better than anyone, since working for Cowboy Confidential is how he met his fiancee.”

All three brothers stared at their grandmother. Then Cade sputtered, “Nick’s engaged? Since when?”

“Since yesterday.” Hattie clasped her hands together, her face glowing. “He and Lucy called me last night to tell me the wonderful news.” Then her blue eyes narrowed. “And it’s about darn time one of you boys settled down. I can’t wait forever to be a great-grandmother.”

Hank cleared his throat. The last thing he wanted to talk about was settling down. “Did you say something about honey buns in the oven?”
“They’ll be ready in about ten minutes,” Hattie told him. “So that’s plenty of time to talk about Cowboy Confidential.” She pulled the bedcovers up around Hank’s bare shoulders and then perched on the side of the bed. “It’s doing even better than I imagined. I hired out your cousin Chet to work at a sale barn across town. Your uncle Brian took a job hauling a purebred Angus bull to a ranch in west Texas, and your cousin Katie agreed to create a software program for a horse breeder in Erath County. That girl is a whiz with computers.”

“Oh, I plan to have plenty of work for anyone who wants it,” Hattie said. “Now it’s Hank’s turn.”

Hank was happy to help out his grandmother, just like he’d been doing since he was eleven years old. That’s when his parents were killed in a car accident, leaving Hank and his brothers to be raised by their grandparents, Hattie and Henry Holden. He still remembered the last words his father spoke to him before his parents left on that fateful weekend trip: Take good care of your little brothers.

And Hank had done just that, determined to fulfill that duty and make his late parents proud. He’d given up his childhood to work on Elk Creek Ranch and help out his grandparents, then paid his way through college and vet school so he could assist the family financially.

Now that Grandpa Henry was gone, he was often tempted to corral his ornery brothers, even though they were all adults now and living their own lives. But if any one of them ever needed Hank, he was there. And he’d always be there for Grandma Hattie too, no matter what she asked of him. “My turn for what…exactly?”

“Well, my friend Edith asked for my biggest, toughest grandson….”

Hattie smiled at them. “You’re all big, strong men, but Hank is the best fit for her job requirement. Maybe you two should have eaten more of my honey buns growing up, like your big brother.” Then she turned back to Hank. “Anyway, Edith is looking for someone to stop a stalker.”

“Edith has a stalker?” Hank had last seen Edith Cummings a few months ago when the petite septuagenarian had brought her cranky Siamese cat into his vet clinic for a wellness check.

“Oh, my no!” Hattie laughed. “Although she is on the hunt for a man. Her husband passed about ten years ago and she’s ready to start dating again.”

Hank closed his eyes and rubbed his forehead with his fingertips. “So what does Edith have to do with this job?”

“She’s in a support group with a friend of the woman who’s being stalked. Edith told her about Cowboy Confidential, so she and her friend contacted me. This stalker is after Dr. Rachel Grant, the therapist of the group.”

He glanced over at his brothers, who looked as confused as he felt. “So this Dr. Grant wants me to protect her from a stalker?”

“Oh, no, Dr. Grant must never be told that her friends pitched in to hire you. Apparently, she’s not that worried about the stalker. But everyone around her thinks she’s not taking it seriously enough.” Hattie leaned closer to him, her eyes twinkling. “So you’ll need to go undercover as a mental patient.”

The hoots of laughter from Sam and Cade didn’t help his headache or his mood, but their amusement died down quickly enough with one stern glance from Grandma Hattie.

“A little therapy never hurt anyone,” she told them. “And Sam, you’re a bounty hunter, so you go undercover all the time. Didn’t you once pretend to be a rodeo clown to catch some runaway felon?”
“Well, sure I did, but….”

“Hey, that’s a good point,” Hank interjected, “this sounds more like Sam’s line of work than mine. I think he’d make a perfect mental patient. And if anyone in this family needs therapy, it’s him.”

“I’ve already got a job.” Sam made a big show of looking at his watch. “In fact, I probably need to leave this afternoon just to get a good start. But I’ll take the next Cowboy Confidential job you’ve got, Grandma. I promise.”

The sound of chimes filled the room and Hattie stood up as she pulled her cell phone from her apron pocket and turned off the timer. “Oh, good, my honey buns are done. Sam, I’ll pack up some for you to take on the road. And Cade, you need to confirm Hank’s appointment with Dr. Grant.”

“Monday morning at ten o’clock,” Cade said, grinning at Hank. “Dr. Grant has a long waiting list, but I was lucky enough get you in due to a cancellation.”

Hank wanted to protest, but he knew once Grandma Hattie made up her mind about something there was absolutely no changing it. He closed his eyes as they left the room, hoping sleep might numb the pain of his bruised body.

Then maybe he could dream about the fastest way to get out of this mess. Because the last thing he wanted was some nosy, highbrow therapist trying to psychoanalyze him. That meant he had to protect her, track down her stalker, and wrap up this job before she could sink her claws in too deep.