Long, Tall, Texan, (previously titled There Goes the Bride) the first book in Wedding Veil Wishes series has been optioned for a TV movie by an independent producer who has strong interest from Hallmark.

Liz Alvin and I are thrilled to announce that Handsome Devils series will be available in audiobooks from Tantor.

Liz Alvin and I are thrilled to announce that Handsome Rancher, the first book in the Handsome Devils series, hit the USA Today Bestseller List. Thank you to everyone who bought a copy. The first four books are up for purchase and Liz and I are working on a fifth book in the series, Handsome Hotshot. 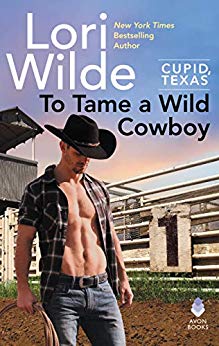 As an author, I write a lot of scenes that never make it into the book for one reason or another. That doesn't mean the scenes aren't fun or compelling, they just that didn't fit well into the ongoing story. Occasionally, I'll bring you some of those deleted.

Here's a provocative scene I cut from my current release To Tame A Wild Cowboy.

Mom’s plan backfired. Without Julie in her crib, Tara didn’t sleep a wink. At least with the baby, she took catnaps between feedings. But the nursery, devoid of the sound of Julie’s breathing, was much too quiet.

She lay on the bed, staring at the ceiling, listening to the clock ticking off the seconds, waiting for dawn so she could get up.

Finally, at six o’clock, she couldn’t stand it any longer and got out of bed. She dressed, went to the kitchen, and put on a pot of coffee. Whipped up a batch of cinnamon rolls and put them in the oven. Her plan was to offer cinnamon rolls to her mother in exchange for Julie.

While the rolls baked, she went out to feed the chickens.

The sun was pushing over the horizon. She’d pulled on denim shorts and red gingham peasant blouse she’d worn last night. The morning breeze was cool, but soon enough, the sun would burn off the chill.

The sky was ablaze with color. Orange, purple, blue. Nature’s shifting canvas, playing shadows over the big red barn. Behind the barn sat the chicken coop. Big enough for the two dozen chickens to nest and run, but kept them safe from hawks, foxes, coyotes and raccoons.

She picked up the wicker egg basket from the top of the feed barrel outside the pen and looped the handle over the crook of her arm. Leaning in, she pried the stubborn lid off the feed barrel, and scooped out a red plastic Solo cup full of food pellets.

There was something white sticking out of the feed. What was that?

She leaned in closer, saw it was a piece of notebook paper folded into a tight little square. She set the Solo cup and empty egg basket and the ground, fished out the paper, unfolded it. Handwritten. Addressed to her.

Just a quick note to let you know I appreciate you and everything you’ve done for me and Julie.

Her heart, that silly pump, skipped a couple of beats. She pressed the note to her chest. Took a deep breath, held it, exhaled. How sweet of him. What a sly little way to show he cared. She smiled and did a circle dance right there in the pasture. Tucked the note into her back pocket. Sighed like a schoolgirl with her first crush.

It didn’t take much to impress her. A small surprise. Heartfelt words of gratitude. And she was hooked. Especially since Rhett wasn’t normally the thoughtful type. She was really starting to like the guy.

Tara flipped the three latch locks that secured the door, picked up the egg basket and Solo cup and stepped inside the chicken pen.

The gentle salmon Faverolles cooed and clucked their good morning, gathering around her as if she were St. Francis of Assisi. She rattled the feed in the solo cup, called softly, “here, chick, chick, chick.”

She turned to look over her shoulder at the house crouched behind her, slumbering in the shadows. She liked the modern ranch better than the adobe-style that was also prevalent in Cupid architecture. Her parents lived in an adobe on the outskirts of town.

If she’d chosen a place to buy, she’d have picked a house just like this one—big kitchen, open floor plan, three bedrooms. But it wasn’t the house that made her heart swell with grateful joy. It was the people who lived in it.

She touched her back pocket where the note nestled.

That when she realized how very much she had missed Rhett and she couldn’t wait for him to come home. Sunday evening seemed a million hours away..

Come back tomorrow for more of the deleted scene…

I hope you enjoy my fresh, updated look.